Burnley F.C. is a prominent professional association football club that is currently based in Burnley, a market town in Lancashire. They are known as “The Clarets” mainly because of the colour dominating their home shirts.

This club is among the founding members of the Football League that started way back in 1888. They have since won several championships from the same league and even the FA Cup. The Clarets have always been one of the best teams in the league. In fact, they are one of the few teams to have won a title on all the 4 prominent professional divisions in the English football league. They are joined by Wolverhampton Wanderers, Preston North End, Portsmouth, and Sheffield United. 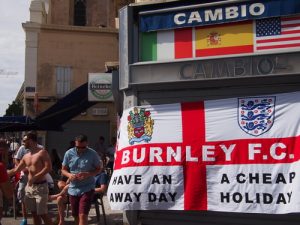 The Burnley F.C. is a very old club. They actually started as a rugby club – the “Burnley Rovers”. In 1882, they officially became the Burnley Football Club. The club moved to Turf Moor where they settled after getting an invitation from the cricket club in town. The fact that it was located next to the town’s stadium is a great bonus.

When the FA Cup paved the way for organised football to take place in 1888, the Burnley football club became one of the teams to dominate and take home the coveted title. They won the Second Division title during the 1897-98 season and they have won repeatedly since then. They even won against Liverpool just before the Great War broke out. Even after the War, the Clarets made their mark on the local football scene. During the 1920-21 season, they had an unbeaten streak in 30 league matches. This eventually led them to win the First Division title. This record was left untouched until the 2003-04 season when it was beaten by the Arsenal.

Burnley F.C. over the decades

Throughout the 1950s to the 1960s, the Burnley F.C. developed an intimidating reputation in the league – but it was only during the 1959-60 season that they once again won the First Division title. It was a roller coaster ride for the club during the 1970s and 1980s. Unfortunately, the club went on a downward spiral during this time – even landing in the basement division. The 1990s saw the rise of the Clarets as they tried to escape the basement division.

Despite these, the Burnley F.C. kept on improving and moving forward off the field. Their failure on the field did not hamper their ability to expand the club and make it stronger. The club redeveloped Turf Moor and the stadium beside it.

During the 21st century, the developments and improvements in the club became more interesting. The club signed goalscorer Ian Wright in 2000 and then Ian Moore around the same time. They were back in the First Division.

Here are some interesting fact about Burnley football club.